After an exciting week last week, attending the book awards in Wellington, I had a much slower week planned out for this week ... a lunch with good friend Lorraine Orman at the Turanga Library; a swim at the New Brighton pools - where I met a writing friend from way  back - Karen Phelps; a school visit to Riccarton College, talking to two classes at a time in the Upper Riccarton Library - very attentive audiences; and then Covid raised its ugly head once again.

Good friend Tania Roxborogh texted me to say there was a case in Auckland - at first I thought she had texted me by mistake as I couldn't see how it would affect me while I'm in Christchurch ... little did I know. Within one hour the country was told we were going into Level 4 lockdown at midnight. Now there are only two of us at the residency. Two of the other residents live in Christchurch so they went home. We toasted each other's health, rang family to tell them we were alright and settled in for the duration. 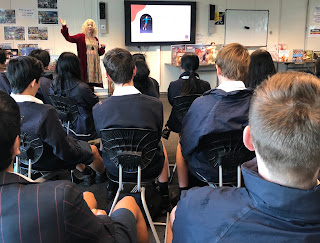 Today I was supposed to have a radio interview for my new book 'Remarkable Animals' - that's been postponed until next week. The book launch at the Great Hall in the Arts Centre on Saturday was cancelled. And just after arranging a school to attend the book launch at the Kelly Tarlton's Aquarium on 3rd September - I had to email them back to say it will be postponed until Auckland is back at Level 1. I guess the same might happen to the book launch at Dorothy Butler bookshop on Sunday 5th September. (I will let people know if it is postponed.)

I'll be listening intently to the 1pm Covid announcements from now on, as I have a nights accommodation booked in Akaroa for Sunday night in preparation for the two school visits I am supposed to be doing in Akaroa and Little River. Plus I'm on tender hooks wondering whether the WORD festival goes ahead next week.  I'm keeping all my fingers crossed that Christchurch does go into Level 2 (at least) by Saturday/Sunday so the numerous events at the WORD festival still go ahead. So much planning went into this and I'd be very disappointed for the organisers, participants, and audiences if it is cancelled. I am supposed to be doing two events for WORD. All fingers and toes crossed here. 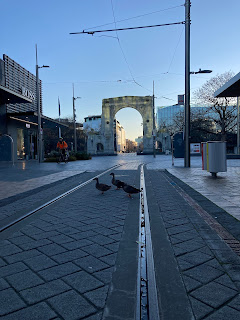 In the meantime, I biked to my (now) local chemist to pick up a prescription (that I can't go without), and saw protesters standing in a crowd, wearing no face masks. One man was barracking another with lots of sweary words. I didn't stop to listen.

A crowd of homeless people were on the corner of Ballantynes in their usual places, tucked into their sleeping blankets. The police were talking to them and then came over to the chemist. I thought they were going to question why I wasn't at home and I immediately volunteered I was picking up a prescription. But they hadn't come to talk to me. Instead they questioned the pharmacist to inquire whether the homeless peoples were being a nuisance and asking after the health of one of them.

On the ride back, I saw some ducks waddling along a usually very busy central city road - possibly wondering where all those noisy, annoying humans were. I felt like a bit more exercise, so I rode to the Botanical Gardens but they were closed. Luckily Hagley Park was open and had many walkers and bike riders taking exercise, with quite a few not wearing face masks.

For the rest of the week, I'll continue my research and hopefully start chapter one. I've been reluctant to begin because I'm still not sure whether to write the story as a creative nonfiction biography or a junior fiction with a character connecting with the scientist.  I'm sure the right way will reveal itself.

Hope you are keeping safe and wearing your face masks!

Posted by https://kidsbooksnz.blogspot.com at 11:20 PM