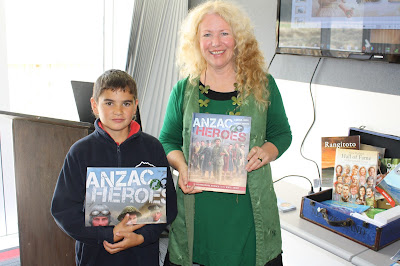 Accomplished children’s author Maria Gill shared stories of ANZAC men and women of WWI and WWII when she officially launched her latest book ANZAC HEROES at the National Army Museum today.
Over 100 school children from Waiouru and Ohakune Primary Schools, and Tokoroa Intermediate were treated to a workshop session with Maria and talented Illustrator Marco Ivancic which included stories of our Anzac heroes, research methods and the use of photos as a reference for art.


Museum Marketing Manager Nicola Bennett said, “We are delighted to have an author of Maria’s calibre here today, the Museum has assisted with the provision of some of the photographs in this wonderful book and it is fitting that it be launched here so close to ANZAC Day.” 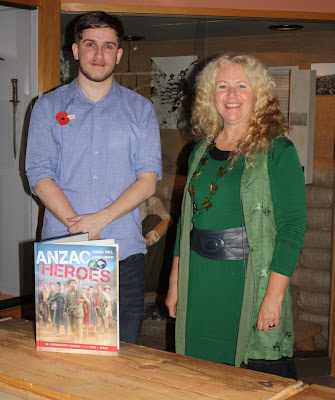 Maria has travelled the country giving ‘author talks’ and this is the start of a series of ‘Anzac Hero’ talks planned to children across the country. “I want to get the message across that these soldiers thought they were going on a big adventure but that was far from the truth. They had to face a lot of hardship and it was quite an achievement to make it home, said Maria.”


Ohakune Primary School teacher Alison Whale said, “It has been particularly fantastic for the children to meet the actual Author and Illustrator and learn about their craft first hand.”


Anzac Heroes gives children an overview of the two World Wars, and takes them on a journey with some of the heroes, focusing on the triumphs and tragedies of 30 heroic Australians. The book is well supported with detailed maps, timelines and charts as well as stunning life-like illustrations and historical photos.


Maria, a former school teacher has written 45 children’s books receiving accolades including seven Storylines Notables and has been shortlisted for six LIANZA Elsie Locke Awards and two New Zealand Post Children’s Book Awards. This is the second book Marco and Maria have collaborated on, the first, New Zealand Sports Hall of Fame, was a 2015 Storylines Notable Book and was shortlisted for the 2015 LIANZA Elsie Locke Non-Fiction Award.


Posted by https://kidsbooksnz.blogspot.com at 4:19 PM No comments: