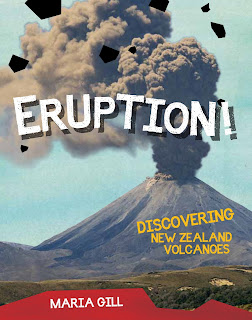 My book has been out for three weeks - now I sit back and wait for the reviews.  So far - the book has had some great reviews.

John McIntyre from The Children's Bookshop in Wellington said on Radio Nz the book is a fine example of how to do it [write non-fiction] properly. It grabs the attention of the passing child, sucks them into reading the whole book ...

"It is a really comprehensive look at the whole world of NZ volcanoes."

He said that children (and adults) won't realise how much information is packed into it because of the way it is designed. Children will read the whole book and tell you they don't read.

John says that Maria has become an expert at writing quality non-fiction and he suspects she not only researches it she is heavily involved in the design and it shows.

I have to confess he is right - I either have a design concept I'd like the designer to start with (and of course they wave their magic wand over it and create something even better) or I have a lot to say during the process.  I'm very lucky that New Holland Publishers allows me to have this input.

Julie Harper also reviews Eruption! in the Magpie Magazine. She says, "In her latest publication, successful nonfiction author, Maria Gill, introduces young readers to the different types of volcanoes featured throughout the country. Adopting the persona of 'Volcanica', a reporter for the Magmatic Press she presents information in an accessible and varied manner."

Julie gives constructive feedback on two items she would have liked to have seen in the book (a diagram to accompany 'Living on Two Plates', and a more extensive glossary) then adds "Eruption! is highly informative and will be a valuable addition to any library collection."

Yesterday, I was interviewed for Plains FM radio 'Women on Air' programme. Rachel Steele said she and her two boys enjoyed the book.  She added that it was very timely with Mt Tongariro alert rating changing from O to 1. I hadn't realised that at the time. I've since read that Mt Tongariro has had a swarm of small earthquakes and this has Volcanologists keeping a closer eye on the volcano. Rachel said that her two boys liked looking up the website links I had recommended for the book under Factopia and Videotopia.

A Librarian from a Whangarei school emailed me to say that she was enjoying reading the book and what she loved about it was that there were other volcanoes in it and not just Ruapehu.

The adults seem to like it - hopefully, kids will feel the same!

Posted by https://kidsbooksnz.blogspot.com at 7:51 PM 29 comments:

Posted by https://kidsbooksnz.blogspot.com at 6:53 PM No comments:

The volcanic cake and sammies


The finalists for the World Kid Lit competition came to the book launch of Eruption! Discovering New Zealand Volcanoes at the National Library on Tuesday July 3rd.  I had given the competitors a talk about my books focussing on the volcano books earlier that day, then they were supposed to leave for a boat trip to see some volcanoes up close but the weather made that impossible.  They came back for the book launch at 1pm.  We started off with a book trailer then an interview with Volcanica and myself.  We also had a little volcanic explosion ourselves. Afterwards, the Kid Lit kids enjoyed volcanic sandwiches, cake, lollies and magma juice.  We had lots of volcanic fun!

Posted by https://kidsbooksnz.blogspot.com at 6:43 PM 7 comments: