I had a fabulous time at the Storylines Family Day in Auckland on Sunday (27th August).  We set up four volcanoes in a row.  I poured in vinegar and baking soda into two of them to give frothy demonstrations of volcanic eruptions.  Quite a few kids were going to go home and try it (good luck, parents!). My hands were covered in red dye by the time I went home.

After the demonstrations, I encouraged children to make paper volcanoes with me. If you want to make one, go to the Eruption! book site on my website and you can download a Rangitoto activity.  Colour it in, cut it out then glue the tabs together. You will then have your genuine own Rangitoto volcano.
Posted by https://kidsbooksnz.blogspot.com at 11:28 PM 3 comments: 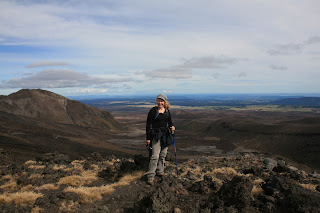 Red Crater in Tongariro Alpine Crossing, the Te Mari crater is on the flank of Tongariro

If you're interested in volcanology then you would have been excited when three volcanoes erupted in New Zealand in the same week.  First, White Island erupted on August 5th. It last erupted in 2001; having erupted continuously from 1976. Scientists predict it is waking up again. Whakatane Police received several reports of lightning . GNS Scientist Michael Rosenberg said lightning is common during volcanic eruptions. It is a result of ash generating electricity.

The next night,Tongariro erupted (on Monday 6th  August). The eruption appeared to come from Te Mari crater (near the trampers' hut).  After spewing ash for a few days it has since quietened down. Heavy rains caused lahars on ash-coated slopes on the mountain. Civil Defense are warning motorists not to stop on State Highway 46 because debris flows have caused dams in a few streams and they fear more lahars.

On August 10th, a large pumice raft was seen floating north of New Zealand. Scientists predict it is a result of a submarine volcanic eruption from one of the many seamounts in the Kermadec arc.  One scientist, Erik Klemetti, predicts it comes from Havre Seamount. He says it most likely erupted on July 18th and had finished by July 20th.

Scientists say that the three eruptions are not connected because they are too far apart to share magma.  However, the tectonics are from the same subduction of the Pacific Plate slipping under the Australian Plate.

So why am I writing about this... Because my children's book 'Eruption! Discovering New Zealand Volcanoes' came out two weeks before the eruptions - talk about timing! I talked about the book on Radio New Zealand that following Sunday.
Posted by https://kidsbooksnz.blogspot.com at 4:25 AM 79 comments:

Saturday 11th August 11am authors, illustrators and librarians are dressing up as pirates, witches, and other Margaret Mahy characters and reading her stories at their local libraries.  I'll be at Warkworth Library dressed as a witch and reading 'The Witch and the Cherry Tree' as well as other stories.

Afterwards, we're all going down to the Auckland Town Hall at 2.30pm to pay tribute to Margaret Mahy.  I hope we'll see you there too!
Posted by https://kidsbooksnz.blogspot.com at 8:50 PM 18 comments:

On July 23rd, New Zealand's greatest children's author passed away.  Margaret Mahy had written over 200 children's books, and hundreds of short stories and poems. She had won many awards over the years: Carnegie medal twice, New Zealand Post, Aim and LIANZA awards, Hans Christian Andersen award and the Order of Merit.

I had the pleasure of meeting Margaret several times over the years; at two workshops and a few Storyline events.  She was a real inspiration as a writer, presenter and as an intelligent woman.  My response - the same as many of my colleagues - when I heard she had passed away was to celebrate her work in some way. "Why don't we organise a nationwide read aloud of her books?" Once someone put that out there - we acted on it.  Within a week we had contacted librarians, authors and illustrators all over the country to see if they would like to join in too. Facebook and email has been a wonderful tool to communicate far and wide.

On the 11th August at 11am authors, illustrators, teachers and librarians will read their favourite Margaret Mahy book(s) at their local library.  Some of us will wear colourful wigs, crazy hats or an outrageous outfit.  We want to feel the Mahy magic as we read her stories.  If you would like to join in - see our blogsite:  http://mmnationwide.blogspot.co.nz to find out which libraries are participating.  You'll find me at the Warkworth Library. Afterwards, we're going to her memorial service at the Auckland Town Hall 2.30pm on Saturday 11th August. RIP Margaret Mahy.
Posted by https://kidsbooksnz.blogspot.com at 2:46 AM 3 comments: