Well, a lot has NOT HAPPENED over the last week. I had to cancel my night's accommodation in Akaroa and the two school visits the next day. The WORD festival has been postponed until November, alas I'll be back in Auckland by then. Radio interviews cancelled. And in anticipation that we'll likely only go down to Level 3 next week, I've postponed another school visit. I'm hoping school visits can resume once we're in Level 2 - I have done them before, all masked up. Also, the Rutherford talk on 1st September has also been postponed. So much organisation down the drain. But there's nothing we can do about it. It is, what it is. I need to also cancel my flight to Auckland for a visit home early September, and two more book launches (there were going to be three altogether).

While all this has been going down, my website failed and my hubby has been trying to fix it. He has to fit it around his own busy work schedule so I've drafted in a techie person to fix it.

It feels like a world discombobulated ... At least, we have a leader who answers questions honestly, communicates with us regularly, and puts people first in our latest lockdown. Every day, Tilly and I eat our lunches and watch the 1pm update.

But it is not all bad ... I've written three chapters since last week and I'm feeling confident I picked the right story to write. I had wondered whether to have the point of view from a contemporary boy or write a creative nonfiction story of the scientist's life. I've chosen the latter. He had quite a few dramatic things happen in his childhood - enough to hook young readers in. I'm enjoying looking up what sayings, equipment or games were around in the 1880s. For example, did people use the word 'awesome' back in the 1880s - yes, they did but not in the context we use it today. Cows were milked in the evenings not the morning, so that the cream would separate from the milk by breakfast time. Chickens and pigs were fed milk waste and vegetable scraps (but no meat). And, though people in the 1880s were aware of electricity they weren't using it as an energy source at that time. And they didn't know how thunder and lightning worked, that wouldn't be proven until the 1920s.Meanwhile back at the residency, there's been no more spooky happenings, drug deals going down at the supermarket, or protest marches. The Preacher has listened to the police and moved a little further away from my window so I'm not woken by his rantings at 6am.

While back at home, Covid19 has arrived in Warkworth. Possibly even in my mum's retirement village. That's too close for comfort.

I have fingers crossed the South Island moves to Alert Level 3 but better still 2, tomorrow. Then I can spend that book voucher that A.J. Fitzwater kindly gave me - wasn't that a thoughtful gift from a fellow creative resident 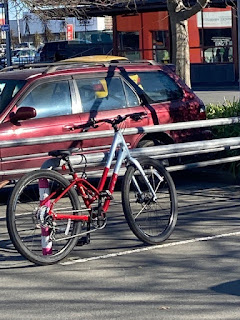 My gorgeous new bike waiting
patiently for me to return from shopping
.

Posted by https://kidsbooksnz.blogspot.com at 11:36 PM