On Sunday 8th September we're having a book launch for two enhanced e-books - the first of their kind in New Zealand:  'Operation Nest Egg chick' illustrated by Bruce Potter, and 'The Rock Standing in the Ocean' illustrated by Heather Arnold - both written by myself, and published by Pixel Book.

The book launch is at 10.30am in the Elephant House, Auckland Zoo (normal admission price applies).  I'm going to tell everyone how I became involved in releasing kiwi chicks and why I wrote the book 'Operation Nest Egg Chick'. To show kids just why kiwi are so endangered I'll get some kids from the audience to act out a scene with puppets. Bruce will then show his artwork and draw a kiwi in front of everyone. We'll then look at the two enhanced e-books on a projector screen. In between speakers, Bruce and I have some awesome kiwi biscuits to give away. A human-sized kiwi is going to give those out for us. Afterwards, kids can draw a kiwi or a kaka and get some tips from Bruce.  Will be a fun morning - do join us! 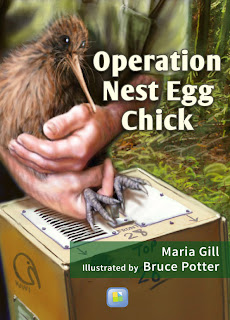 
·         In line with the New Zealand and Australian curriculum


Maria Gill is an award winning author with a background in teaching and journalism. Three of her books have been shortlisted for New Zealand Post Children’s Book Awards. New Zealand Hall of Fame won the children’s choice award in the non-fiction category. Four books have been shortlisted for the LIANZA awards, and five have been awarded Storylines Notable Book Awards. Maria also volunteers for the BNZOperation Nest Egg programme helping release kiwi chicks onto Motuora Island. www.mariagill.co.nz


Bruce Potter has illustrated over 100 children’s books. His illustrations for Papa’s Donuts earned him a second place in the World’s Best Illustration at the 2007 Gourmand World Cookbook Awards. His book Ngā Taniwha I te-Whanga-nui-a-Tara by Moira Wairama won the Te Kura Pounamu award at LIANZA 2012. Bruce Potter’s realistic artwork has been sold in galleries, he teaches children and adults how to paint, and he’s drawn caricatures for newspapers around the world.


$1 from each book goes to the Kiwis for Kiwi Trust 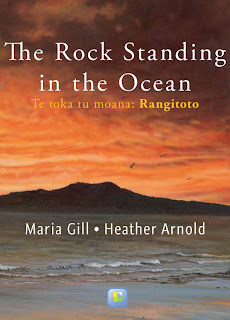 The Rock Standing in the Ocean by Maria Gill, illustrated by Heather Arnold (www.pixelbook.co.nz)

Have you ever wondered how a submarine volcano becomes an island?


The Rock Standing in the Ocean tells the dramatic story of how a volcano formed, how it became populated with animals and plants until a menace threatened its survival. Find out how the island’s guardians are saving it today.


·         Interactive activities  with a Word Find, a colouring-in picture and online links

Posted by https://kidsbooksnz.blogspot.com at 8:02 PM