Books in the Making

Books in the Making 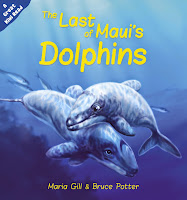 It has been a busy year. In February, New Holland Publishers released my picture book called 'The Last of Maui's Dolphins'. It is a fictional story about a Maui's dolphin saving its friends from a set net.  Some reviewers have called it a creative non-fiction book but I call it a picture book. It made me think about the definition of what a creative non-fiction story is. More people are aware of the term now but it is being used for books that don't technically fall into that category. I believe it is has to be about something factual but written in story format.  For example, 'Rangitoto' is about the birth of a volcano and it is written using story techniques. I also have a creative non-fiction story in 'The Call of the Kokako' a true story about how one man saved ten kokako.  'The Last of the Maui's Dolphins'  has been popular and sold well all year.

While I was thinking of marketing opportunities for the dolphin book I was also teaching a 'Writing for children' paper at Massey University. I then spent three months writing a teaching resource for Essential Resources. It should have only taken six weeks but for the first time ever I had writers' block. I've decided it is essential you have down-time during the Christmas break instead of working through or else you tend to burn-out.  I tried everything to get through this block from sitting at the desk every day to writing a journal to setting goals but most days I just banged my head against the keyboard.  In desperation I tried a bach flower remedy that is supposed to help you get over blocks. I also had to read an affirmation aloud every time I took the drops. It worked and I finished 'Critical Essay Writing'; a book that helps teachers teach essay writing across the curriculum. It might have been timing and I had got over the block or else ... spookier things have happened. If you're desperate and want to give it a try it's called 'Essence of D'Light' the "Manifestation" flower crystal/homeopathic remedy. 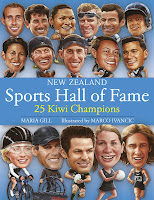 In August my book 'New Zealand Sports Hall of Fame' was released by New Holland Publishing. I've been thrilled at how popular this book has been. It sold out within three weeks and had to be reprinted. The kids are loving reading about their heroes featured in an easy-to-read format with action photographs and talented Marco Ivancic's illustrations.  I was interviewed by numerous radio stations around the country about the book. I found it amusing that they asked me the question whether I had a sporting background and when I told them I did ballet and competed in national ice skating competitions, they said, so you don't have a sporting background. Ummm, team sports no, but creative sports - yes. Some of the radio announcers liked the book so much they were encouraging kids to buy it for their fathers for Fathers Day.  The most popular question was: Who were my favourites? I answered that I was impressed with sports people who had overcome incredible obstacles in the beginning and yet came out top in their fields such as Valerie Adams - both her parents died before she turned 20 years old; Cindy Mosey - the only survivor in a plane crash that killed all her family and she excelled in three sports including being World champion kite surfer three times; and of course Sophie Pascoe - who had a terrible accident at two years old that resulted in her losing her leg but has won more world champion gold medals than anyone else in New Zealand has ever won. Of course, I have Richie McCaw, Sonny Bill Williams, and Sir Russell Coutts and other amazing athletes in the book. See if your favourite sport star is in there too. 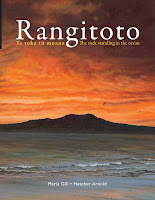 For the first time I published two books under my imprint Long White Cloud Books.  For years booksellers had been asking me where they could buy 'Rangitito' which had been published by Penguin New Zealand but had gone out of print.  It had been republished digitally last year by Pixel Book and I loved how they include slide shows and audio. We called it 'The Rock Standing in the Ocean' to reach a wider audience. However, we needed a print version as well. The printed book is bigger than before. Illustrator/designer Heather Arnold has changed some of the illustrations and design elements such as no white space at the bottom - the text space is now more blended with the illustration; I had up-to-date information about how scientists think field volcanoes erupt so Heather altered the diagram in the middle of the book; we also changed the page that featured all the different styles of volcanoes; and we included all 55 volcanoes. When the book was first published there were only 48 volcanoes known. A professor of geology in Australia saw the book and endorsed it, and a geology scientist in New Zealand fact checked it. The text was only tweaked but we still had it checked by an editor and a proof reader. The end result is - it looks fabulous and we're really proud of it. 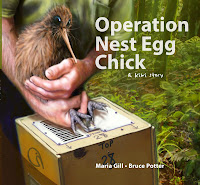 The other book published under the imprint Long White Cloud Books is 'Operation Nest Egg Chick'. This is the first time this book has been published in print but it had been digitally published by Pixel Book last year. The digital version includes a video and lots of fabulous slide shows. The printed book is glossy, in a large size, with a creative non-fiction story, and a fact box on each page. It is illustrated with Bruce Potter's half-cartoon-half-real illustrations drawn on the computer, and includes lots of photographs with the text boxes.  Bruce Potter has drawn the eyes of the kiwi much bigger than they naturally are and he said he deliberately did this because he wants children to empathise with the kiwi chicks in the story.  The story is about two kiwi chicks; one survives to become part of the Operation Nest Egg programme that is saving kiwi all over New Zealand.  You'll have to read it to find out what happens to the other kiwi chick. To complement the book Heather and I put together some photographs and videos of kiwi releases on Motuora Island and published it on a webpage here. 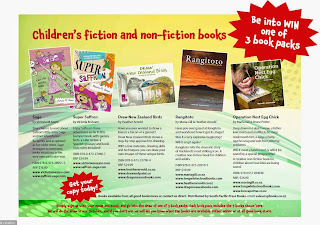 I launched three of the above books at the National Library along with two great friends: Heather Arnold (she published 'Draw New Zealand Birds' under the imprint Dragonsauce Books) and Victoria Azaro (she published 'Sage' and 'Super Saffron' under the W4 imprint).  The three of us have worked together giving each other feedback on our books, writing/designing our publicity sheets, and promoting our books together.  We've also made sure we've included all the publishing process and had our books professionally designed, edited and proofed. The books are being distributed by South Pacific Books. We also set up shops on our websites so that people can buy direct from us too.  I've included all my books in the Long White Cloud Book shop as some are still in print but hard to find in bookshops (that tend to only stock the latest books nowadays). It is very exciting getting book orders!

Several smaller projects I worked on this year have been an article in the latest Magpie Magazine about Betty Brownlie author/illustrator of the Life Cycle series; and two articles for Kiwi Conservation Club 'Wild Things' magazine one about bullies (not the ones you think) in the Issue 123 Winter and another about conservation dogs in their next issue. Editor Johanna Knox is doing a wonderful job with this children's magazine - I highly recommend it for the home and school library.

At the moment, I'm researching an ANZAC book that comes out in 2016. I was extremely fortunate in receiving a Creative New Zealand WW100 grant that is enabling me to travel to Australia for two weeks to research the Australian soldiers in the book. For the first time ever I'm getting paid for every hour I work on the book too (due to the grant). I am thoroughly enjoying researching New Zealand and Australian soldiers. Their stories are awe-inspiring and sometimes tragic. My challenge is to make their stories exciting and also impart how difficult it was for the soldiers. We're calling the book 'ANZAC Hall of Fame: 25 Heroic Soldiers'. It is part of the New Zealand Hall of Fame series but I've included Australian as well as New Zealand soldiers (it is a truly ANZAC book), and some of the design elements are going to be different. We'll let you find that out when it is released in March 2016.

I hope you enjoy my books!
Posted by https://kidsbooksnz.blogspot.com at 4:30 PM 1 comment: